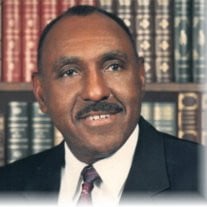 Obituary of Deacon Willie T. Sensley, Sr. “The steps of a good man are ordered by the Lord, And he delights in his way.” ~ Psalm 37:23 Willie Toler Sensley, Sr. was born in Clinton, Louisiana October 28, 1931 and departed his earthly home on December 26, 2013. The fourth of five children of the late Booker T. and Idella Wiley Sensley, he was formally educated in the East Feliciana Parish School System, graduating from Clinton’s East High School in 1948. He received a bachelor’s degree in vocational agriculture from Southern University in 1952 and attended Louisiana Tech in economics in 1972 before earning a master’s degree in agricultural economics from Prairie View A & M University in 1973. He served in the United States Army from 1952-1955, where he earned the rank of Captain, and served during the Korean War. After receiving employment with Louisiana State University Agriculture Extension Service for Union and Lincoln Parishes, Deacon Sensley made his home in Farmerville, LA, where he remained a resident until his death. He was united in marriage with Goldie Johnson on February 22, 1955. Their union was blessed with two children: Ercel Gelety and Willie, Jr. Deacon Sensley accepted Christ at an early age, thus beginning his Christian stewardship in the Mount Carmel CME Church, and he remained a dedicated and faithful Christian until death. He was a devoted member of the Blooming Grove Baptist Church for the 50 years, serving as a deacon and chairman of the finance committee. An extremely active member of the Farmerville community, Deacon Sensley spent over thirty years as an area agent for the LSU Agriculture Extension Service for Union and Lincoln Parishes, and served 16 years on the Union Parish Police Jury – President for 2 years. His contributions while in office were numerous and are still being enjoyed by the residents of this parish. An entrepreneur, in partnership with his son, he owned and operated a 580 acre farm where they produced poultry and beef cattle. He was also the owner and operator of Sensley’s Thrift-E Village, a community shopping center. In 2007, he developed the largest community housing complex in Union Parish,, Union Village Farmerville North Villa Subdivision, consisting of 50 apartments and 24 duplexes. His service extended outside of his community to this state, where he served the Southern University system as a member of the Southern University Board of Supervisors, serving as Chairman from 1990-1993. Deacon Sensley was also a member of the Louisiana Economic Development Council, Ark-La-Tx Gas Company Advisory Committee, the Selective Service Board #35 for 15 years, Southern University Commissioned Reserve Office Federation, LA Private Sector Initiative Program and a Lifetime member of Southern University Alumni Federation. He leaves to cherish his memories: one daughter, Ercel Gelety Sensley Brew (Rafash) and one son, Willie “Butch” Toler Sensley, Jr. (Debra) both of Farmerville, LA; one aunt, Ella Sensley Pitts of Zachary, LA; one brother-in-law, Sie Larry Terrell; one sister-in-law, Dianne Marshall Sensley; seven grandchildren: Ashel E. Carter (David) of Dallas, TX, Maurice S. Jordan (Shayla) of Houston, TX, Goldie C. Jordan of Baton Rouge, LA, Spencer Sensley, Skyler Sensley, Alacia Brew of Farmerville, LA, and Kimberly Pillette of Shreveport, LA; six great grandchildren: Cameron Jordan, Cody Jordan, Madisyn Jordan of Houston, TX, David Carter, Xavier Carter of Dallas, TX and Alexander Moody of Shreveport, LA; a special son, Elder James Jones of Ruston, LA; one special daughter, Elnora Benson of Farmerville, LA; two Goddaughters, Stephanie James and Helena Fennoy; and a host of relatives and friends. Willie was joined in death by his loving wife of 58 years, Goldie Johnson Sensley and preceded in death by his parents, Booker T. Sensley and Idella Wiley Sensley; two brothers: Booker T. Sensley, Jr. and Robert “Hoover” Sensley; two sisters: Bessie Sensley Dunn and Lillie Mae Sensley Terrell; and one grandson, Dontrelle Tucker. “...O give thanks unto the Lord; for He is good; for His mercy endureth for ever.” ~Psalm 106:1

The family of Deacon Willie T. Sensley Sr. created this Life Tributes page to make it easy to share your memories.

Obituary of Deacon Willie T. Sensley, Sr.
“The steps of a good...

Send flowers to the Sensley family.