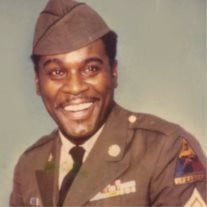 Celebrating the Legacy Of Shelton Ralph Armstrong, Sr. Our Father, Brother, Grandfather, Uncle & Friend Obituary Shelton Ralph Armstrong, beloved eldest child of the late Jarfree Armstrong and Ella Lee Warren (Robert Warren), was born June 9, 1938 in West Monroe. After 75 joyous and adventurous earthly years, he departed this life on Monday, February 10, 2014 in Monroe, Louisiana. Ralph attended and graduated from Boley High School in 1957. He promptly followed in family tradition by joining the Army. He proudly fought for our country in the Korean War as well as the Vietnam War. He was a Staff Sergeant that served as a motor transport operator and a physical activities specialist. He was awarded the National Defense Service Medal, Vietnam Service Medal, Vietnam Campaign Medal, Vietnam Cross of Gallantry with Gold Star, Korean Service Medal, Good Conduct Medal, and United Nations Service Medal just to name a few. He was a part of the 3rd Battalion 11th Infantry, 5th Infantry Division. He retired from the military in 1985 after 21 years of service. He then began his career as a postal worker in his hometown. He retired from the workforce in 1995. During that time, he was married three times and had six children. He traveled the world and lived his life with passion. Ralph, or ‘Strong as he was so fondly called, will forever be remembered for his free spirit, his dedicated military service and his love for cooking and sharing those dishes with family and friends. Ralph’s legacy will continue through the lives of his children, Shelton R. Armstrong, Jr. (Norma Castillo), West Monroe; JoElla Armstrong, San Antonio, TX; Tammi Armstrong, West Monroe, LA; Shani Armstrong, Monroe, LA; Shelton Demetrius Deal, West Monroe, LA; Samuel Smith, West Monroe, LA; a sister, Judith Washington (Roosevelt Washington), Lake Charles, LA; his significant other, Shebrenia Deal; 10 grandchildren, 2 great grandchildren, a niece, a nephew and a host of cousin and friends.

The family of Mr. Shelton Ralph Armstrong, Sr. created this Life Tributes page to make it easy to share your memories.

Celebrating the Legacy Of
Shelton Ralph Armstrong, Sr.
Our...

Send flowers to the Armstrong, family.