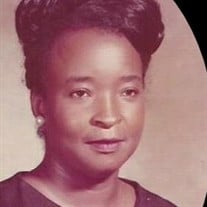 Mrs. Ruby Mae Broadnax Sheridan was born August 31, 1930 to the union of the late Cleveland and Jessie S. Broadnax in Grayson, LA. She transitioned into the presence of the Lord on May 24, 2020. Mrs. Sheridan instilled teachings of God to her children at a young age. She made sure that they attended Sunday School every Sunday. She served as church secretary for many years at Evening Star Baptist Church. She was also the coordinator for Vacation Bible School. She would even pick up the children during that time and load them on the back of her truck. She also helped raise funds for other various church needs by selling popcorn balls and Rice Krispy treats. Later she joined Covenant Worship Center where she was loved and honored, and fondly known as “Mother Ruby”. She remained faithful in every area of Chrisitian duty and responsibility until her passing. She loved and served God with all her heart. To quote her, “It is a great joy being a Christian and always looking to God for everything.” From a very young age she knew the importance of a good education and hard work. Whether it was by walking miles to catch the school bus or later by picking cotton to fund her college education, she would allow nothing to stand in the way of school or her education. Mrs. Sheridan earned a B.S. degree in education from Grambling College and a Master’s Degree from Texas Southern University. She worked as an elementary school teacher for 33 years until retirement from Union Central Elementary. She met her husband and love of her life, Robert Charles Sheridan, Sr. at Grambling College. They married and their union was blessed with two children. They had a gift for entrepreneurship with their main goal being to have a safe place for the community to gather for good food, soft serve ice cream, playing pool, and music. They opened the Green Dairy Palace, which later became R & R Food Mart. Being an awesome cook, she enjoyed preparing food for the business. She believed in feeding people well with love and plenty. She was known locally and throughout surrounding areas for her delicious tea cakes. She even became known to many as the “Tea Cake Lady”. Her tea cakes were sought after by all for their delicious down home goodness. Ruby Mae was preceded in death by her husband, Robert C. Sheridan, Sr., brother-J.C. Broadnax, Sr., sister-Ethel B. Glass. She leaves to cherish her memory her children: Mary S. Hearns (Luna), Columbia, LA; Robert Sheridan, Jr. (Rose), Grayson, LA; her 6 grandchildren: Valerie Hearns, Veronica Hearns, Vanessa Hearns, Robert “Trey” Sheridan, III, Triston Sheridan, Phillip Sheridan. She also leaves to cherish her memory a host of nieces, nephews, cousins, church family, and friends.

Mrs. Ruby Mae Broadnax Sheridan was born August 31, 1930 to the union of the late Cleveland and Jessie S. Broadnax in Grayson, LA. She transitioned into the presence of the Lord on May 24, 2020. Mrs. Sheridan instilled teachings of God to... View Obituary & Service Information

The family of Mrs. Ruby Mae Sheridan created this Life Tributes page to make it easy to share your memories.

Send flowers to the Sheridan family.