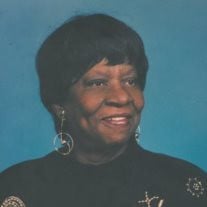 Ruby Lee Calloway-Smith was born to Rillar Woods (Calloway-Golden) and Percy Calloway, in Starks Arkansas on February 28, 1925. Later moving to Jones Louisiana. As an adult she lived in Chicago, Los Angles and ultimately settled in Saginaw, Michigan. She is pre-deceased by both parents, two brothers; Amos and Douglas Moore. Her husband’s, respectively: Roosevelt Tolliver, George Banks and Allen Smith. She leaves to cherish her memory, two daughters Marian Elaine Banks-Nickleberry and Catherine Marie Webb both residing in Monroe Louisiana, a son Hiawatha Smith, residing in Byhalia MS, a nephew, Amos Moore, two foster daughters: Denise and Theresa Burris and one special God daughter Tzana Smith, all residing in Ann Arbor Michigan. Five grandchildren: Hiawatha Smith Jr, Danielle Davis, Demica Smith, Shawatha Smith and Christopher Lawrence, four great grandchildren. Beloved cousins: Florence (SL) Humphrey; Carolyn Washington, Dewitt (Leora) Franklin, Johnny (Shirley) Powell. She loved and cherished her in-laws, the Diggs, Smith families and Cynthia Moore. A special sister/friend: Ruby Sims & Family. Ruby worked for the State of Michigan for many years performing Home Chore Services and for St. Stephens Convent as a Cook, both positions were reflective of her care and compassion for others. During her life she provided love, shelter, support and mentorship to many children and adults. In total over 15 had the privilege of living with Ruby and Allen at pivotal points in their lives, providing them a safe haven, strong support and often well needed tough love, with an emphasis on love. She believed that every flower could blossom, if well-nourished and watered. She stressed education and hard work was the key to being successful. Ruby was known for being frank and honest in her words, and while not always “warm and fuzzy”, her actions and deeds reflected the true content of her character. Never one to fear confrontation of what she thought was injustice, or intolerance, in 2010 at the age of 85 she and her daughter Marian joined Al Sharpton in the march on Poverty, riding a bus from Detroit MI. to Washington DC. She was determined to make her voice heard, no matter how frail, she was the eldest person on the bus, everyone especially the very young were inspired by her drive and asked to be photographed with her. EASTERN STAR TRIBUTE Ruby was an (Eastern Star) member of the Order of Eastern Star for over sixty years. She was a very loyal and faithful member that stood out as an example of what a member should always be, humbly serving in many positions within the order, especially when it came to her service to the community. She was always trying to help someone in some form or capacity. It was noted that “Losing Ms. Ruby Calloway Smith, is a loss of a member so beautiful and faithful that all members should never forget. We will miss you our very dear sister and bright star”. Ruby was also an active Elks member, Charlet Ray Temple. Besides her civic duties Ruby loved to fish, play Bingo, Cards and having fun with her family and friends.

Ruby Lee Calloway-Smith was born to Rillar Woods (Calloway-Golden) and Percy Calloway, in Starks Arkansas on February 28, 1925. Later moving to Jones Louisiana. As an adult she lived in Chicago, Los Angles and ultimately settled in Saginaw,... View Obituary & Service Information

The family of Ms. Ruby Lee Calloway -Smith created this Life Tributes page to make it easy to share your memories.