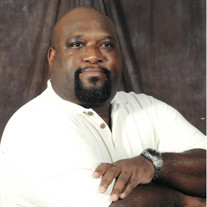 OBITUARY Rickey Vaughn Harris was the second child of three children born to the late Robert Authur and Doris Harris born on July 11, 1966 in Chicago, Illinois. He was baptized at the age of 8 at Bethel Baptist Church in Monroe, Louisiana. At the age of 2, his father was stationed to Stuttgart, Germany for a 3-year tour of duty with the US Army. Upon returning to the country, the family moved to Long Island, New York and finally settled in Monroe, Louisiana. Rickey was a product of Monroe City Schools where he graduated from Wossman High School in 1984. Rickey enlisted in the United States Navy and rose to the rank of Petty Officer. He served his country faithfully for 20 years and received an honorable discharge. In 1996 Rickey married Kazumi Eida (Japan) and to this union one son was born. Rickey remarried in 2001 to Etsuko Nakagawa and she remained his constant devoted companion until his death. Rickey was an avid “Techie”. An electrician by trade, he loved to master the language of computers, refurbishing and networking them with consummate ease. He loved to read and collect comic books, he also loved to spend time with his wife and family dog “Lex”. Rickey loved and adored his mother, sisters and family. He enjoyed and cherished his time spent with them…. from intimate holiday dinners for 25, to the annual “Christmas Tree wrecking party.” The side walk connecting two houses owned by (2)-sisters has embellished precious memories for all. Rickey leaves to cherish his memory his wife Etsuko Harris-Spring, Texas; one son- Robert Makoto Harris-Japan; mother- Doris Harris-Monroe; two sisters, Charmayne Harris-Wiley- Monroe; Tonya Harris-Fields, (Rickey Fields)-Fresno, Texas, trusted and devoted companion and cousin- Andrew Furlough-Spring, Texas; one niece-Gabriella Wiley-Monroe; one nephew/Godson-D’Andre Wiley- Monroe, LA, Monroe; two aunts, Margaret Crawford- Farmerville, Joyce Thomas- Nebraska and a host of cousins, friends and loved ones.

OBITUARY Rickey Vaughn Harris was the second child of three children born to the late Robert Authur and Doris Harris born on July 11, 1966 in Chicago, Illinois. He was baptized at the age of 8 at Bethel Baptist Church in Monroe, Louisiana.... View Obituary & Service Information

The family of Ricky Vaughn Harris created this Life Tributes page to make it easy to share your memories.