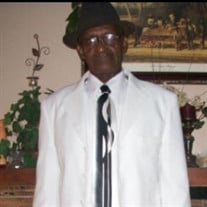 Deacon Percy L. Tribble, Sr. A “Celebration of Life” Service for Deacon Percy Lee Tribble, Sr. will be held on Saturday, February 4, 2017, 11:00 a.m. at Rose of Sharon Baptist Church (Rev. A. B. Davis-Johnson, Sr. is the Pastor). Deacon Tribble passed away suddenly at his home on Sunday, January 29, 2017. On this day, Deacon Tribble was doing his favorite thing, attending morning and afternoon Church Services. However, God called him to eternal rest that evening. Deacon Tribble was born to the late Rachel Williams Tribble and Robert Tribble on July 10, 1937 in Monroe, LA. He had 6 sisters and 3 brothers to precede him in death. He attended Carroll High School and Richwood High School. Deacon Tribble was married to Vera Dean Jones Tribble and to this union three children were born: Percy Tribble, Jr. of Arlington, TX, Stanley Tribble (Sandra) of Monroe, LA and Tonya Tribble of Austin, TX. They also have a daughter that they raised as their own, Carolyn Robinson of Las Vegas, NV. He was employed for 40 years with Plumbing Corporation in West Monroe, LA. He was a faithful member of Rose of Sharon Baptist Church where he served as Chairman of the Deacon Board for over 14 years. He also served as the Church Treasurer and a Trustee. He was a member of the Brotherhood (former President) and an active member of Sunday School. Deacon Tribble’s legacy will live on in the hearts of his wife, Vera Tribble; his children: Percy, Jr., Stanley, Tonya and Carolyn; his sister, Katherine Tribble (Monroe, LA); 6 grandchildren, 2 great-grandchildren, numerous relatives, friends and his Rose of Sharon Baptist Church family. Visitation for Deacon Tribble will be held on Friday, February 3, from 1:00 p.m. – 6:00 p.m. at Miller’s Funeral Home (2932 Renwick Street, Monroe, LA). Following the service on Saturday, interment will be held at Richwood Memorial Gardens.

The family of Deacon Percy L. Tribble Sr. created this Life Tributes page to make it easy to share your memories.

A “Celebration of Life” Service...

Send flowers to the Tribble family.