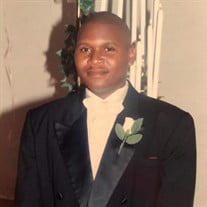 Nick Greely, age 53, died April 21, 2020, at LSU Oschner Health in Shreveport, Louisiana. Nick was born on October 23, 1966, in Monroe Louisiana, and was a lifelong resident. He worked for Turner Industries. While growing up in Monroe, Nick found he had an acumen for sports, and he played football at Ouachita High School where he graduated in 1984. Nick also attended Northeast Louisiana University before he joined the U.S. Army. Nick loved being outdoors and his favorite activity was fishing. He was also a very skilled chef. He could cook anything. Even if you didn’t know what it was you knew it was going to taste good. Nick knew no strangers and always had a smile ready. Nick was the baby of six siblings and adored for his easy-going nature. Speaking for the family, Nick’s elder brother Reese says “Today we stand here in a very sad place in our life. We still cannot come to grips with or believe that we are laying him to rest. We will always miss him.” A former military comrade described Nick like this: I met Nick when we were based in Fort Bragg in the 3rd Firing Platoon, 3rd Battalion 27th FAR MLRS (Deep Strike) --- (Ghost Nation) forever! In many algebraic equations, we’re often trying to solve for “X”, however, in the Nation, Nick was and always will be “X”. Nick was my Launcher Driver and he was one of the absolute best. He mastered that huge beast under all types of weather conditions and on any terrain. Nick was a very integral part of our organization, often reminding us to not take ourselves so seriously. I still see the glowing smile and a very serious stare that only Nick could bring off. He was always willing to go the extra mile in the performance of his duties and even though he was younger than many of the others, they looked to him often for his thoughts on many different issues. Nick took great pride in his work, country, and himself, and he was loved, respected, and admired by the entire unit.” The discipline and patriotism he learned in the Army never left him, as friends and family will attest. Nick leaves behind to mourn him, his two children Nicklaus, and Zaria; his father, Jesse Sr.; three brothers, Reese Wilson, Jr. (Miriam), Henry Greely (Ola Fay), Jesse Jr. (Shirley, pre-deceased); two sisters, LaShelle (Toni) and Frances “Frankie” (Mark, pre-deceased) and his longtime companion, Robyn. He also leaves his loving aunts, uncles, nieces, and cousins. He is preceded in death by his mother, Shirley Benton, and stepmother, Velma Greely. Arrangements are private and being handled by Miller Funeral Home, Monroe LA

Nick Greely, age 53, died April 21, 2020, at LSU Oschner Health in Shreveport, Louisiana. Nick was born on October 23, 1966, in Monroe Louisiana, and was a lifelong resident. He worked for Turner Industries. While growing up in Monroe, Nick... View Obituary & Service Information

The family of Mr. Nick P. Greely created this Life Tributes page to make it easy to share your memories.

Send flowers to the Greely family.