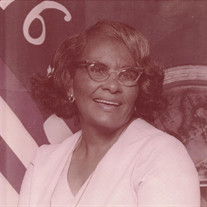 A SYNOPSIS of LIFE Sis. Maurine Gipson Harris was born on December 3, 1918 in Arcadia, Louisiana to the late Jerry Gipson and late Alberta Jones. At an early age, she was baptized at the Springhill Missionary Baptist Church. She later moved into the Shady Grove community where she attended Sunday School and church services. Shortly after her marriage, she moved her letter to Mt. Calm Missionary Baptist Church. On October 21, 1934, she became the bride of Jim Harris, Jr. To this union, they were blessed with seven children: Claude Earl Harris, Sr., Ruston, LA; Bobby Gene Harris, deceased (Lois, Los Angeles, CA); Torrie Joe Harris, Sr., Ruston, LA; Dorothy Jane Harris-Bishop, Kansas City, MO; Dorris Ann Harris-Haynes (Tommy), Ruston, LA; Gloria Dean Harris-Hopson, Fairfax, VA; and Jimmy DeWayne Harris, Rio Rancho, New Mexico. Once she moved her letter to Mt. Calm, she was a faithful worker in the church. She was a loyal member of the Adult Women’s Sunday School class and served as President of the Mission Society. She became a Deaconess in 1955 and served as a Senior Usher. She remained a working church member until her health started to fail her. She continued some of her duties as Deaconess until she was no longer able to perform her tasks. Her work extended beyond the church when she became an Eastern Star with Mt. Calm #104. She was also a member of the Grambling Chapter of AARP. Maurine was a homemaker and employed by Louisiana Tech University as a Custodian in the women’s dormitories for 19 and ½ years. She completed her elementary education in the Lincoln Parish School System. After living in the Mt. Calm Community for 20 years, the family moved to Grambling, LA. in 1965. Maurine Gipson Harris lived a life of caring for others and sharing with others. She was a hard worker during challenging times, happy times and did so with lots and lots of laughter. She was preceded in death by her husband, Jim Harris, Jr; one son, Bobby Gene Harris; one stepson, Roy James Harris, Sr; one son-in-law, Hunter Stratton Hopson, Jr., one grandson, Torrie Joe Harris, Jr., two granddaughters, Laurinda Porchia-Hernandez & Wanda L. Harris and one great-granddaughter, Myeshia Pruitt; one sister, Willie Maude Nutt; six brothers, Fred Moses Tolbert, Samuel Claude Tolbert, Clyde Tolbert, Willie Allen Tolbert, Jones T. Tolbert & Freeman Tolbert. She departed this life on January 11, 2015 at her home in Grambling, Louisiana. To cherish her memory, she leaves her six children; one son-in-law; the daughter she did not give birth to, Linda Caldwell Harris; 29 grandchildren; 48 great-grandchildren; 42 great-great-grandchildren; two sisters: Roberta Diamond of Ruston, LA; Alberta Scott of Milwaukee, WIS; four sisters-in-law: Louise Tolbert, Ruston, LA; Marie Tolbert, Margaret Tolbert & Archie Lee Tolbert Kansas City, MO; one brother-in-law, Allen Diamond of Ruston, LA. Lastly, a host of nieces, nephews, cousins and other relatives and friends.

A SYNOPSIS of LIFE Sis. Maurine Gipson Harris was born on December 3, 1918 in Arcadia, Louisiana to the late Jerry Gipson and late Alberta Jones. At an early age, she was baptized at the Springhill Missionary Baptist Church. She later... View Obituary & Service Information

The family of Mrs. Maurine Gipson Harris created this Life Tributes page to make it easy to share your memories.

A SYNOPSIS of LIFE