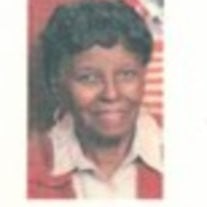 Marie Louise Jones Adams was born July 29, 1921 in New Orleans, Louisiana to the late Louis and Mary Louise Jones. She was an only child whose mother died when she was two months old. Marie was reared by her paternal grandmother and father during her early years and later by an aunt, Tina Stewart, and a family friend Agnes Meggs, who taught her the art of sewing. Marie confessed Christ at an early age and made her first communion at St. Charles Borromeo Catholic Church in Destrahan, Louisiana. She later joined Saint James United Methodist Church after moving to Monroe, LA. where her uncle the Rev. T. R. W. Wallace was pastor. She attended Catholic schools during her early years and graduated from Gilbert Academy, a prestigious college preparatory high school in New Orleans, LA., that was affiliated with New Orleans University. Marie Graduated from Southern University in 1944 and did further study at Tuskegee Institute, Alabama. In 1944, she married Edgar Adams, who preceded her in death in 2002 after 57 years of marriage. To this union was born two daughters, Veraldine and Bernadine, both of whom were her passion along with sewing and gardening. She taught adult sewing classes for many summers and her yard was always in bloom. Her career spanned many years in the Monroe City School System, first as a home economics teacher at Monroe Colored High School and later home economics, bachelor living, and general science at both Carroll and Neville High Schools. Retiring in 1980, her students will always remember her positive and caring attitude for their general well being and success. She spared no words to guide her students in the right direction. After being unable to drive and not as mobile, she found herself more home bound. Marie transitioned from her earthly home Thursday, April 25, 2013 Special appreciation goes to those who over the years continuously kept in touch by calling, visiting or showing care namely; Edna Caston Francis, Gloria Sweet, Barbara James James of First Missionary Baptist Church,Class #14, Barbara Jackson, Robert Cherry and the St. James United Methodist Church Family. Since her illness, special thanks to Sharon Butler, Adrine Miles, Kim, Cooper and Tosha Mollette of St. Francis Medical Center staff, Bernadine Phillips of Supreme Home Health, and the administration and staff of Mary Goss Nursing Home, for your acts of kindness and caring. She leaves to cherish many loving memories, daughters, Veraldine Adams Bush (Maurice) of New Orleans, LA.; Bernadine Adams of Monroe, LA.; grandchildren, Candace Marie Bush, Jason Maurice Bush, and Heidi Marie McHenry, cousin, Robert Franklin (Barbara), of Peoria ,AZ.;and a host of former students,other relatives and friends.

Marie Louise Jones Adams was born July 29, 1921 in New Orleans, Louisiana to the late Louis and Mary Louise Jones. She was an only child whose mother died when she was two months old. Marie was reared by her paternal grandmother and father during... View Obituary & Service Information

The family of Ms Marie Louise Adams created this Life Tributes page to make it easy to share your memories.

Send flowers to the Adams family.