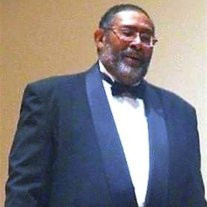 "A LIFE WELL LIVED" Louis Adam Nabors, Jr. was born October 1, 1943 to Lillian Conerly-Nabors and Louis Nabors. The eldest of five children, Louis was preceded in death by his parents and sisters, Karen and Martha. Louis married Pearlie Profit, PhD. and to that union two sons, Louis, III and Jeffrey were born. Both Pearlie and Louis, III preceded Louis in death. After the death of his beloved Pearlie, God sent him another soul mate, Mara Lewis. He and Mara married and to this union one daughter, Lillian Isabella, was born. Louis was a member of the Antioch Primitive Baptist Church under the leadership of Elder Nathaniel McGaskey. Louis had his first experience as a soloist when his eighth grade teacher allowed him to sing a song to obtain extra credit in a mathematics class. Louis chose "White Christmas" and his class gave him a standing ovation, to his great surprise. Southern University and Agricultural & Mechanical College admitted Louis on a trombone scholarship. However, it was Louis' performance in an elective choir class that captured the attention of the music faculty and staff. The faculty marveled at this accidentally discovered talent and believed Louis was in his element as a singer. Mentors continued to encourage Louis’ interest in vocal performance as he completed the BM at Southern University and Agricultural & Mechanical College and later, the MM in Voice from Prairie View Agricultural and Mechanical University. A revered colleague, teacher, and mentor to ULM students and many successful musicians throughout the state of Louisiana and the world, Louis Nabors served as Head of voice and was a member of the faculty of the University of Louisiana at Monroe Department of Music for nearly forty years. His stellar performance career is highlighted by appearances at the Kennedy Center and with symphonies and opera companies throughout the United States and the world. Louis sang with American companies in Arizona, Houston, Los Angeles, Fort Worth, Shreveport, and throughout Louisiana. He sang internationally throughout Germany, Italy, the Philippines, and the Bahamas. Louis also appeared in musical theater productions nationally. He was honored to receive the 1990 College of Liberal Arts Performing Artist of the Year award and additional honors and recognition for outstanding community service. In 2005, Louis performed the role of Amonasro in Elton John’s Aida. In the summers of 2007 and 2010, he performed the role of Sarastro in Mozart’s The Magic Flute and in the summer of 2008, he sang the role of Simone in Puccini’s Gianni Schicchi. Louis sang both roles with the Amalfi Coast Music Festival in Italy, where he also served on the faculty. Louis is one of the founding members of Spiritual Voices and completed recital tours throughout Germany in 2006 and 2009. Spiritual Voices will return to Germany in December 2013 to sing concerts in Hannover and Stuttgart, Germany in loving memory of Louis Nabors. Louis Nabors, a beloved husband, father, friend and colleague leaves to truly cherish his memory, his wife, Mara; son, Jeffrey; daughter, Lillian Isabella; grandchildren, Jaylah and Jeffrey, Jr.; brothers, Isaac (Malinda) and Joseph (Patricia); a host of aunts, uncles, nieces, nephews, cousins, many dear friends and every student he taught and mentored throughout his distinguished career as an artist/teacher.

The family of Mr. Louis Adams Nabors, Jr. created this Life Tributes page to make it easy to share your memories.

Send flowers to the Nabors, family.