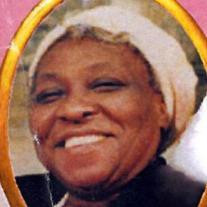 Sister Lizzie Mae Harris was born in Collinston, Louisiana to John and Bessie Mae Robinson, both who preceded her in death along with her six siblings; five brothers, Alvin, Henry, John, James and Grover Robinson; one sister; Rosie Mae Robinson, one grandson; Louis E. Mack, Jr. She confessed Christ at an early age at the Sale No. 3 Baptist Church in Collinston, LA under the leadership of the late Rev. Flood Jackson. She later moved to Bastrop, LA and united with the Philadelphia Baptist Church under the late Rev. C.H. Homes where she was an obedient servant of God. She then moved her membership to the Saint Timothy Baptist Church under the late Rev. F.D. Perkins to pursue her calling as a Missionary. Lizzie served as a Missionary teacher to the young and the old as to how they should live and serve the Lord until her health failed her. She was under the leadership of Rev. Lonnie mcGhee until her death. She leaves to cherish her memories six children; Jimmy Harris Jr., Albert A. Harris Mack, Albert Harris, Joann Harris, John Harris (Cammie), all of Bastrop, LA, and Dorothy Ann Harris Alford of Las Vegas, NV, four sisters; Louise Arberry of Dermont, AR, Mary Johnson of Bastrop, LA, Betty Robinson (Nathaniel), Clemestine Daniels (John), both of Monroe, LA, one aunt; Sophie Tippit of Chicago, IL, one uncle; Henry Tippit of Dayton, OH, eleven grandchildren; twenty-five great grandchildren, and a host of nieces, nephews, relatives, and friends.

The family of Ms Lizzie Mae Harris created this Life Tributes page to make it easy to share your memories.

Sister Lizzie Mae Harris was born in Collinston, Louisiana to...