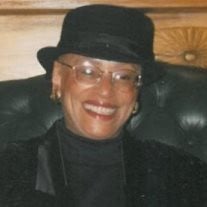 OBITUARY LILLIAN ROSE ROBINSON BROADEN Anne Bronte wrote, “…but he who dares not grasp the thorn, should never crave the rose.” To have known Lillian Rose, most affectionately known by her very namesake, “Rose”, is to have known her zeal for life was simply uncanny. She literally and unapologetically took life by the hand and said, “Let’s dance!” This brilliant life force was born to this world on February 7th, 1942, in Baton Rouge, Louisiana, as the only daughter of the late Eddie G. Robinson, Sr. and Doris Mott Robinson. A true “Daddy’s Girl”, Rose was very active in sports (basketball) and ultimately became a majorette for the Grambling Laboratory High School, where she received her high school diploma. In life, however, Lillian Rose followed the path of her mother, maternal grandmother, and grand-aunts in becoming an educator after having received her Undergraduate and Master’s degrees from then Grambling College, now Grambling State University. Lillian Rose first entered the workforce teaching electronics at the United States Army’s Redstone Arsenal and NASA’s Marshall Space Flight Center in Huntsville, Alabama. Rose would return to the United States Department of Defense years later teaching helicopter pilots at Fort Rucker, Alabama. Yet it is safe to say, Lillian Rose’s greatest passion came from teaching her kindergarten students, having taught in Natchitoches, Louisiana and Shreveport, Louisiana. In each system, she completely immersed herself into the community and the school family and made certain her students had the very best learning environment. Rose had many loves in life, although her one constant in life was the love she shared for her two children; her late brother and late sister-in-law Eddie Robinson, Jr. and Gloria Robinson; her mother and father; and her bond with her sisters of Delta Sigma Theta Sorority, Inc. Her physical presence will be missed greatly, yet her infectious spirit lives on in each of her family members and cherished friends. She leaves to cherish her memories her beloved mother, Doris Robinson; son, Michael Watkins (Stacey) of Dallas, Texas; daughter, Cherie Watkins Kirkland of Atlanta, Georgia; three grandchildren, Brittni Lauren and Michael Watkins, II of Dallas, Texas; and Channing Kirkland of Atlanta, Georgia; nephew, Eddie Robinson, III (Antoinette) of Atlanta, Georgia; niece, Sharon Moore (Michael) of Jonesboro, Georgia and niece, Cheryl Clifton (Charles) of Lithonia, Georgia; seven grand nephews and nieces; and a host of devoted relatives and friends from around the world. Our beloved Rose blossomed for the final time on the evening of February 18th, 2014. Homegoing Services will commence this Friday, February 21st, 2014 with a public viewing at the Miller Funeral Home in Ruston, Louisiana, from 3pm to 5pm. The Homegoing Service will be held Saturday, February 22nd, 2014 at the New Rocky Valley Baptist Church at 1pm.

OBITUARY LILLIAN ROSE ROBINSON BROADEN Anne Bronte wrote, &#8220;&#8230;but he who dares not grasp the thorn, should never crave the rose.&#8221; To have known Lillian Rose, most affectionately known by her very namesake, &#8220;Rose&#8221;,... View Obituary & Service Information

The family of Ms Lillian Rose Robinson Broaden created this Life Tributes page to make it easy to share your memories.