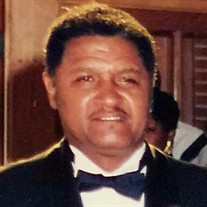 The Life of Leroy Modacure, Jr. Leroy Modacure, Jr, age 74, was called to heaven on February 20, 2018 while in Jackson, Mississippi. He was born to Leroy Modacure, Sr. and Juett S. Modacure on November 18, 1943 in Monroe, Louisiana. He was the second of their two children. He went to the Southern School for the Deaf in Baton Rouge, Louisiana where he graduated in 1967. It was there at school that he met and fell in love with Sally H. Modacure. They wed in 1970 and settled in New Orleans to start their family. They raised two daughters. He and Sally returned to his birth city, Monroe, Louisiana in 2005 after evacuating Hurricane Katrina in New Orleans, Louisiana. He resided in Monroe, Louisiana until his demise. Leroy was a hard worker at the U.S. Postal Service for 38 years before retirement. Leroy enjoyed socializing with his friends, learning and teaching sign language and being with his family and friends. Leroy was preceded in death by his wife, Sally H. Modacure, of 39 years. He leaves behind his two daughters: Bettina Wheeler of Cheyenne, Wyoming (married to Darnell Wheeler, Sr.) and Velma Modacure-Johnson, of New Orleans, Louisiana (married to William Johnson, II). He will be dearly missed by his sister Rose Ann Smith (Monroe, Louisiana) and his loving mother, Juett Modacure (Monroe, Louisiana). He will be remembered by his four grandchildren: Darnell Wheeler, Jr (Wyoming), Ciara Wheeler (Wyoming), William Johnson, III (New Orleans) and Kayla Johnson (New Orleans). He also leaves behind a host of sister and brother in laws, nieces and nephews, and friends. Funeral services for Leroy Modacure, Jr will be held on Saturday, March 3, 2018. Services will be held at Miller’s Funeral Home. Visitation will be held from 10 am – 11 am. Funeral Service will begin at 11 am. Burial will be at Richwood Memorial Gardens. His homegoing celebration will be held at 700 South Sixth Street, Monroe, Louisiana.

The family of Leroy Modacure Jr. created this Life Tributes page to make it easy to share your memories.

The Life of Leroy Modacure, Jr.

Send flowers to the Modacure family.