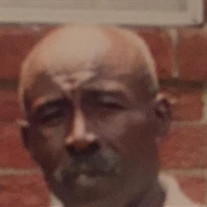 “So we are always of good courage. We know that while we are at home in the body we are away from the Lord, for we walk by faith, not by sight. Yes, we are of good courage, and we would rather be away from the body and at home with the Lord. “ 2 Corinthians 5:6-8 Langford Craft was born on July 23, 1945 to the blessed union of the late Ervin “Doke” Craft, Sr. and the late Willie Mae Lofton Craft in Smith County, Mississippi. Langford attended Combs McIntyre High School in Oak Grove, LA. Known by many names, such as PaPa, Mr. Whiskers, Brer Rabbit, Bedlo, Zora, Gold can, Wine, Hank, Buddy, Yank, Lank, Sharp, Lil toothpick, he was known as a man of his word. He was always willing to help and had many talents and a love of raising livestock and farming sweet potatoes. Langford was often times referred to as a man that could do just about anything that needed doing. Having a mother that was deeply rooted in Christ, Langford always knew the Lord. Later in life, he joined Green Grove Missionary Baptist Church where he committed his life to Christ. On February 4th, 1967, Langford Craft was united in holy matrimony to Catherine Holloway and from this union came three (3) sons: the late Langford Jerome, Maurice Lorenzo, and Jakarta LeBronse Craft. On Monday, November 23, 2015 at approximately 11:28 am, the Angel of Death came from Heaven and reclaimed our beloved one, Langford. Langford was preceded in death by his sister Deonnia (Ellis, Sr) Edgleston, sister Mildred Artist Craft, brother Ervin Craft Jr., brother William Lee Craft, and granddaughter Janice LaJoyce Davis. Langford leaves to cherish his memories a devoted and loving wife and friend, Catherine Holloway Craft; three sons: Maurice Lorenzo (Kala BurrellCraft) of Maryland, Jakarta Lebronse (Cianne Grossman) of Dallas, TX, and Mark Anthony Davis (Janice) of Monroe, LA; Eight (8) grandchildren: DeVontay (Scooby), LeDerris (Deon), Langston, Zora-Reign, Jamie Alexis, Charlene, Lisa, and Arinika. Two sisters: Earlean (Hamp Jr) Blackmon of Las Vegas and Mary Brown Spearman of Atlanta. Six brothers: K.Y. (Rosezina) of Pulaski, MS, K.C. of Bastrop, Arthur (Martha-deceased) of Oak Grove, Andrew of Oak Grove, Charles of Bastrop, and John Henry of Las Vegas. A special Godsister: Phyllis Blackmon (Will) of Darnell and a host of nieces, nephews, great grandchildren, cousins, in-laws, relatives, and friends.

The family of Mr. Langford Craft created this Life Tributes page to make it easy to share your memories.

“So we are always of good courage. We know that while we are...

Send flowers to the Craft family.