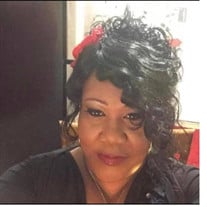 Strength and honour are her clothing; and she shall rejoice in time to come. She openeth her mouth with wisdom; and in her tongue is the law of kindness. She looketh well to the ways of her household, and eateth not the bread of idleness. Proverbs 31:25-27 (KJV) Kara DeVonne Carter-Gant Her smile was contagious and could light up any room. She loved fiercely, expecting nothing in return. With a heart of gold, she would give you the shirt off her back. Giving and thoughtful are characteristics that best describe her nature. Desiring no more than to be a blessing to all she encountered. Warm and endearing she was and it is that legacy of love that she leaves to be celebrated and remembered. On February 24, 1963, God chose to bless the late Mary Katherine Caldwell-Washington and the late Oscar Carter with a beautiful baby girl whom they decided to name Kara DeVonne; a wonderful name for one with a spirit that could illuminate the darkest day. Like sunshine, Kara was a burst of light and energy. Her positive vibe with everyone was unrivaled. Throughout her lifetime, Kara touched many lives with her bright smile and sparkling personality. She was truly a one-woman glam squad. It was as if she felt that if she looked great, she felt great and caused others to feel the same. She believed in looking, as well as being her best self for every person she greeted. She even influenced those with whom she came in contact to be committed to excellence as it pertained to beauty and well-being. Kara was so genuinely pleasant that she never met a stranger. Loving, kind, and giving were attributes that she possessed in abundance and rendered ever so freely. Her days were filled with putting others before herself, so unselfish and nonjudgmental. It would be safe to call her the most caring fashionista extraordinaire that Monroe, Louisiana and Oakland, California ever witnessed. While Kara was a lover of people and life itself, at the very heart of her was her family, especially her children. Her love for them was incomparable. She never forgot to make holidays special for her family and friends. She believed in putting God first, her family second, and herself last. She exemplified this each day as she gave of herself tirelessly to make other people happy, a true friend who loved at all times. She attended school in Oakland, California. Her very diverse career background ranged from retail to drug rehabilitation to environmental services to healthcare. She had many years of experience working as a Sales Associate, Drug Rehab Counselor and Direct Care Service Provider. A true testament that serving others was not just a way of life, but it was her passion. In order to be the kind of woman Kara was, she had to know the Lord. She accepted Christ at an early age and later attended Liberty Christian Center and Zion Traveler Baptist Church. Kara knew that we serve God by serving our fellowman. Kara had two wonderful sons prior to her meeting, falling deeply in love with, and then marrying the love of her life, Alton A. Gant. To their union, one lovely daughter was born, KaDedra Keyara. Larry Dominique and Isaiah were filled with joy at this new edition and at last, Kara’s life was complete. After this, Kara’s life was never again the same! Her life had new meaning. Kara was a lover of life until February 14, 2018 when God called her from the land of the dying to cross over to the land of the living where life is now a loving her by cradling her in the arms of the eternal Savior. Left to carry on her legacy of love is her husband, Alton A. Gant, Jr.; one daughter, KaDedra Keyara Carter, Baton Rouge, LA; two sons, Larry Dominque Carter Monroe, LA. and Isaiah Heard, Bernice, LA.; four brothers, Roderick Reed (Deneshia) Pittsburg, CA., Darren Carter (Rayville, LA), Anthony Carter and Demetrius Jenkins both of Monroe, LA.; four sisters, Tammy Washington, Oakland, CA., Dove Carter, Sherri Carter and Kerri Carter all of Detroit, MI.; mother-in-law, Mrs. Ola D. Gant and two sisters-in-law Juanita Gant Woods and Karen Gant-Andrews (James) of Monroe, LA.; and a plethora of nieces, nephews, other family members, and friends.

Strength and honour are her clothing; and she shall rejoice in time to come. She openeth her mouth with wisdom; and in her tongue is the law of kindness. She looketh well to the ways of her household, and eateth not the bread of idleness.... View Obituary & Service Information

The family of Kara DeVonne Carter-Gant created this Life Tributes page to make it easy to share your memories.

Strength and honour are her clothing; and she shall rejoice in...

Send flowers to the Carter-Gant family.