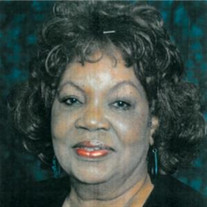 A Brief Biographical Sketch Sister Jerriedine Ford Hester Woods July 13, 1937 - November 10, 2015 Mrs. Jerriedine Ford Hester Woods was the first child born to the late Jerry and Ora Lee Ford of Monroe, LA on July 13, 1937. She entered into eternal rest on Tuesday, November 10, 2015 at home surrounded by family and loved ones. Her entire life held purpose and meaning. She embraced Christ at an early age and was baptized at Tabernacle Baptist Church. She had a passion for life and a spirit of giving and helping others whenever and however she could. Her career began after graduation from Carroll High School, Class of 1954. She obtained a Bachelors’ Degree in Business Education from Southern University and Agriculture and Mechanical College. She continued her professional development by also obtaining a Master’s Degree in Business Education from Southern University. She continued her education for Plus 30 hours from the then Northeast Louisiana University. Armed for professional action, she began her teaching career at Boley High School and later Richardson High School in West Monroe, LA. Her final public school destination would be West Monroe High School to continue her career of preparing students for life’s challenges for the next 40 years. She retired from Ouachita Parish School System in the spring of 1995. Her love for education compelled her to return to service through employment with the Opportunities Industrialization Center (OIC) in the fall of 1995. For the next seventeen years, she would continue to prepare young adults for the workplace. In the spring of 2015, her love for children and education afforded her the opportunity to return to the classroom as a substitute teacher for Richwood Senior and Junior High Schools. Jerriedine was a faithful member of Tabernacle Baptist Church until she became too ill to attend. She was a member of the adult choir, served as a vacation bible school teacher, served as a Sunday school teacher and a member of the Worthy Women of Tabernacle Society. Her love of prayer directed her to the Refuge Worship Center for spiritual reinforcement under the guidance of Overseer Inez Walker. A loyal and devoted member of Alpha Kappa Alpha Sorority, Incorporated, Zeta Phi Omega Chapter, she served in many capacities. Her passion was serving as Director of the Cinderella Guidance Clinic. Jerriedine served Alpha Kappa Alpha and Zeta Phi Omega Chapter for 51 years. The Monroe Community will miss the works of Sister Jerriedine as a Devoted Mother and Grandmother, Radiant Beauty, Gracious Philanthropist, Prayer Warrior, Perpetual Educator, Dedicated Sorority Sister and Gourmet Cook. Jerriedine was united in Holy Matrimony to the Late Bennie Hester, Sr. To this union three sons were born. She later united in marriage with the late Floront Woods. Jerriedine Departs in Loving Memory Her Children, Lorenzo Ford, Dallas, TX, Bennie Hester Jr., Los Angeles, CA, and Benard Hester (Nicole), Houston, TX; Her Legacy will continue through her Grandchildren, Ethan Cole Hester and Aidan Matthew Hester; Her Brother, Mr. Arno Ford (Brenda) will always remember her as a loving sister who expected and wanted nothing but the best. Her brother-in-law Philemon Hester of Las Vegas, NV and special cousin Shana Alexander of Monroe, LA will continue to rejoice in her memory. Those who celebrate her memory include a host of relatives and friends. Preceding her in death are her parents Jerry and Ora Lee Ford and her in-laws Mr. William Hester and Mrs. Vivian Hester. She will be reunited with her lifelong friend and eternal sister Doris Jean Smith Welch.

The family of Mrs. Jerriedine Ford Hester-Woods created this Life Tributes page to make it easy to share your memories.

Send flowers to the Hester-Woods family.