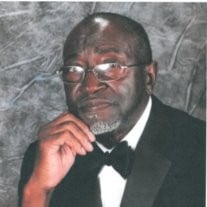 Remembering J. J. “…and we all know that all things work together for good to them that love God, to them that are called according to his purpose.” Romans 8:28 On July 21, 1941 Willie Sr. and Lue Nittie Jones Johnson were blessed with their... View Obituary & Service Information

The family of Mr. James Johnson created this Life Tributes page to make it easy to share your memories.

Remembering J. J.
“…and we all know that all things work together...

Send flowers to the Johnson family.