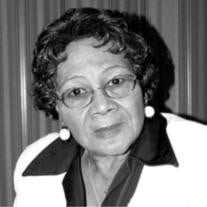 Our beloved Mother Henrietta Holmes George born June 5, 1923 in Natchitoches, La., to Benjamin Holmes and Eleanor Louise Sawyer Holmes. She departed this life quietly and peacefully Monday, November 26, 2012 at 1:20pm at her home. Henrietta was baptized in Jesus name at an early age at the Catholic Church in Campti, Louisiana. She had one brother, Buddy Lloyd and one sister Dorothy Sawyer, both deceased. In 1938 she married Charles Dewitt Scott and to this union three children were born; Charles Dewitt Scott, Jr., Judge D. Scott and one daughter, Daisy Marie Scott, all who preceded her in death. In 1938 she attended the University of Minnesota and in 1943 graduated from Southern University Summer Normal Teacher's College in Baton Rouge. She began her career in Campti, Louisiana as a third and fourth grade elementary school teacher. She taught School in Haughton and Pleasant Hill ending in 1946. In 1947, after World War II she met and married Rev. Jessie George (deceased '83), to this union were born four sons: Jessie George, Jr. (deceased '84), Joseph Lee George, Winthrop Elton George and Sherwood George. From 1948 through 1964 she devoted much of her time to rearing her children. She pursued a brief career in accounting after studying at Northeast Louisiana State College. Henrietta H. George lived her life as a servant to mankind. Mrs. Henrietta George was active in the PTA, and became a fixture at J.S. Clark Elementary School as an active participant in her son’s education and school accountability. In 1966 she began her work in the newspaper business. In 1968 she served as editor of the Monroe News Leader. The same year in the midst of school desegregation she resigned after the owner of the newspaper demanded her son Jessie, Jr. be removed from Wossman High School as the first black student to participate in school desegregation. The same fate waited her husband, Rev. Jessie George, Sr. as an employee of the Monroe City School System. In 1971 Mrs. George was appointed to the Ouachita Parish Bi-racial Committee after a consent decree by the federal district court enjoining the Ouachita Parish School System “from continuing its segregated practices and issued a desegregation plan.” In August 1965 black parents and students filed suit in federal district court for the desegregation of the Monroe City School System. In 1971 Henrietta Holmes George was elected to the Monroe City School Board. She served on the School Board until 1986, and was President of the Board for several terms during her tenure and continued her fight for equity. Mrs. George continued her public service endeavors at Marbles Recreation Center and finally at Emily P. Robinson Community Center. She retired from public service in 2006. She leaves to mourn her loss, four sons; Charles Dewitt Scott, Jr. (Irene) Diamond Bar, Calif., Bishop J. L. George of Sicily Island, La., Sherwood L. George of Dallas, Texas and Winthrop E. George of Monroe, La., nine grandchildren, four great-grandchildren, several nieces, nephews and a host of relatives, friends and loved ones.

The family of Mrs. Henrietta Holmes George created this Life Tributes page to make it easy to share your memories.

Send flowers to the George family.