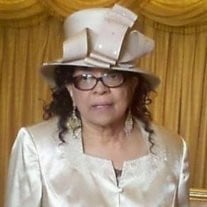 Obituary of Missionary Goldie J. Sensley “Favour is deceitful, and beauty is vain: but a woman that feareth the Lord, she shall be praised.” ~Proverbs 31:30 Goldie Johnson Sensley was born in Ville Platte, LA on February 8, 1934 to the late Lessie Hudson and late Robert Johnson. She was raised by her grandmother, Lena Jason, who also preceded her in death. She was formally educated in the Evageline Parish School System, where she graduated from James Stephen High School in 1953. She matriculated to Dillard University where she spent two years majoring in nursing and was a member of the Lady Basketball Team. She left Dillard to attend Grambling State University where she graduated with a B.S. Degree in Education and later furthered her studies at Southern University in Baton Rouge, LA. She was united in marriage with Willie T. Sensley on February 22, 1955 in New Orleans and later resided in Farmerville where she soon became an integral part of the community. Their union was blessed with two children; Ercel and Willie Jr. She and Willie, Sr. opened Sensley’s Thrift E-Village in the early seventies and it still remains open to today. In the early 1960s, Goldie taught school in Union Parish for 30 years. After retiring, she returned to various schools for another 10+ years of service in which she touched the lives and minds of countless children and adults. She was the first African American Classroom Teacher to integrate the Rocky Branch Elementary school; had a preschool in her home; taught adult night classes; educated the children of migrant workers in the summers; and worked in the church based tutoring program at Blooming Grove Baptist Church. Goldie was a devoted member of the Farmerville Church of God in Christ where her beloved Elder Kennedy and Missionary Kennedy preside. In over 60 years, she has given honor to those in leadership and authority and served on a number of boards and in various auxiliaries including Sunday School Teacher, YPWW, Church Secretary, Committee Chairman, Prison Ministry, and her favorite – always bringing new saints to church. Her dedication to serve and improve the lives of others garnered several honors including outstanding volunteer services. Her delight was in reading and studying the Word of God, cooking, shopping, tutoring children, and spending time with her husband of 58 years and her loving family. Goldie was called home to be with her Lord and Savior at 12:30 a.m. Friday, December 27, 2013. To cherish her beautiful memories, she leaves her two children; one daughter, Ercel Gelety Sensley Brew (Rafash) and one son, Willie “Butch” Toler Sensley, Jr. (Debra) both of Farmerville, LA; two sisters: Norma Jean Hudson of Missouri City, TX and Katherine Lemelle (James Stanley) of Zachary, LA; one brother: Earl Davis of Baton Rouge, LA; one sister-in-law, Doris Hudson of Columbia, S.C.; seven grandchildren: Ashel E. Carter (David) of Dallas, TX, Maurice S. Jordan (Shayla) of Houston, TX, Goldie C. Jordan of Baton Rouge, LA, Spencer Sensley and Skyler Sensley of Farmerville, LA, Alacia Brew of Farmerville, LA, and Kimberly Pillette of Shreveport, LA; six great grandchildren: Cameron Jordan, Cody Jordan, Madisyn Jordan of Houston, TX, David Carter and Xavier Carter of Dallas, TX and Alexander Moody of Shreveport, LA; two special sons: T.C. Hill of Farmerville, LA and Elder James Jones of Ruston, LA; two special daughters: Evelyn Burrell of Bastrop, LA and Mieshia Walker of Monroe, LA; two Godchildren, Stephanie James and Helena Fennoy; and a host of relative and friends. Goldie was joined in death by her loving and devoted husband of 58 years, Willie Toler Sensley, Sr. and preceded in death by her parents, Lessie Hudson and Robert Johnson; grandmother, Lena Jason; a sister, Gloria Marie Jack; two brothers, Elder Edgar Hudson and Lester Davis; and one grandson, Dontrelle Tucker. “In every thing give thanks: for this is the will of God in Christ Jesus concerning you.” ~ I Thessalonians 5:18

Obituary of Missionary Goldie J. Sensley &#8220;Favour is deceitful, and beauty is vain: but a woman that feareth the Lord, she shall be praised.&#8221; ~Proverbs 31:30 Goldie Johnson Sensley was born in Ville Platte, LA on February... View Obituary & Service Information

The family of Mrs Goldie M. Sensley created this Life Tributes page to make it easy to share your memories.

Send flowers to the Sensley family.