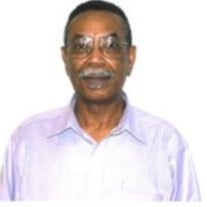 A time to be born, George Bernard Hadley was born to the late Ameal Hadley and late Geneva Cross Hadley , January 28, 1947 in Monroe. A time to die, Bernard took his journey into eternity October 11, 2013, when he took God's hand of mercy and entered into the heavenly mansion that the Father has promised. Bernard graduated from Lincoln Elementary School, Carroll High School of Monroe and Southern University School of Engineering in Baton Rouge, Louisiana. He joined the Zion Spring Baptist Church where he attended Sunday School faithfully and was baptized in the Ouachita River by Rev. Davis at the age of 6. He was joined in Holy Matrimony to Dorothy Williams in 1974. This union existed 41 years in keeping with the promise that "til death do us part." To this union was born two daughters: Gelauna and Diadra. During Bernard's CHS and Southern University days he had several close friends and acquaintances, including McKinley Matthews, Donald White, Roy Lee Davenport, and Michael Smith, and Lem Johnson (all deceased) and Michael Futch and Raymond McCoy. Bernard loved his 60's and 70's music and could rock in a rocking chair listening for hours. Bernard (George) was the best father in the world and the best husband in the world. A very devoted husband who loved his wife. Her wish was his command. Through the years, he kept a spicy romance going with her. He loved and raised his daughters to become fine young ladies and responsible citizens. Bernard worked as a civil engineer who designed bridges and street layout in the District of Columbia and in several states including: California, Utah, West Virginia, Texas, Louisiana, and Florida for the Federal Highway Administration for a total of 41 years. He was instrumental in helping to determine where the 18th Street extension would be placed so that it would not interfere with the Magnolia Cemetery on DeSiard Street in Monroe. He helped to design the exit from I-20 East to the Pecanland Mall and fought for more square footage for the overpass there. He often expressed frustration about the current condition of the bridges in America. Bernard trained many others during his tenure as a civil engineer and will be greatly missed by his co-workers, friends and family. Preceding him in death are his parents and brother Arthur Donnell Hadley (Zeke). Cherishing his memory are his wife Dorothy; daughters Gelauna and Diadra Hadley of Atlanta GA; a sister, Autrey Hadley of Monroe, LA; a brother Joseph (Joe) Hadley of Thornton, CO; a very close niece, Audrenia (Donald) Franklin of Monroe, LA; and a host of nieces, nephews, cousins and friends. Services are 2:30PM Saturday, October 19, 2013 at Miller Funeral Home. Visitation will be held 1-7:30PM Friday, October 18, 2013 at Miller Funeral Home. Internment will be in Richwood Memorial Gardens under the direction of Miller Funeral Home.

A time to be born, George Bernard Hadley was born to the late Ameal Hadley and late Geneva Cross Hadley , January 28, 1947 in Monroe. A time to die, Bernard took his journey into eternity October 11, 2013, when he took God's hand of mercy and... View Obituary & Service Information

The family of Mr. George Bernard Hadley created this Life Tributes page to make it easy to share your memories.

A time to be born, George Bernard Hadley was born to the late...

Send flowers to the Hadley family.