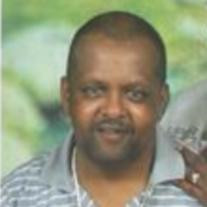 Brother Ernest (Bubba ) Pollard was born on July 17, 1952 in Monroe, Louisiana to the late Leon Lewis Sr. and Cora Mae Pollard. He was preceded in death by his parents, and a son Ernest T. Pollard Jr. also a sister Tarvie Powell. He was baptized... View Obituary & Service Information

The family of Mr Ernest Trevelyan Pollard Sr. created this Life Tributes page to make it easy to share your memories.

Send flowers to the Pollard family.