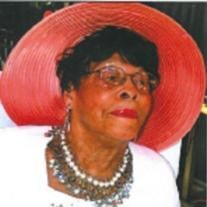 Our beloved Mother Earnestine Williams was born on July 14, 1919 to John and Gracie Gray in Boscoe, Louisiana. She was one of 13 children born to this blessed union. Our heavenly Father welcomed Earnestine home on November 25, 2012. She attended Boscoe Elementary School and Rhymes High School. As a youth her sister remembers her singing and praying to the Lord. She later joined Mount Sinai Baptist Church in Alto, Louisiana where she served on the Mother's Board. She also provided meals for the Pastor and his family every Sunday. Mother Earnestine realized that the most fulfilling and rewarding life for her would be that of a homemaker, so in 1939 at the tender age of 20, she married Silas Williams and was blessed with 11 children. Her son Levon, her husband Silas and her youngest daughter Patricia preceded her in death. Her husband Silas was a farmer and Earnestine and the children worked together with him in the fields growing cotton, planting peanuts and produce, and also raising husbandry. Earnestine had a generous and giving spirit and was never too busy to welcome others into her home to partake of her gracious "southern" hospitality. She was an outstanding cook and passed her love of the culinary arts down to her children and grandchildren. In 2000, Earnestine ('Pretty Woman Mama' as she was often referred to by her children) relocated to Los Angeles, California and spent many years enjoying her children, grandchildren and great-grandchildren with her main residence with Arthur and his wife, Eleanor and her daughter Dorothy. While in California she attended New Commandment Missionary Baptist Church in Paramount as a mother of the church. In 2008 she began to experience physical challenges in her body and was no longer able to participate in church services. She leaves to cherish her memory 5 sons: Pertee of Alto, LA., Arthur of Downey, CA, Edward (Stephanie) of Oakland, CA, Silas (Brenda) of Rayville, LA, Howard (Deandra) of Lo ng Beach, CA, 3 daughters; Mary Gilbert (Julius) of Monroe, LA, Rosa Dancy(Leroy) of Inglewood, CA and Dorothy (Adolf Dulan) of Los Angeles, CA, 3 brothers; Leamon Gray of Vallejo, CA, Joseph Gray (Lucille) of Oakland, CA, Archie Lee Gray of Oakland, CA, 2 sisters; Louise Brown of Oakland, CA, Mary Lewis of Oakland, CA, 25 grandchildren, 36 great-grandchildren, 5 great-great grandchildren, nephews, nieces and a host or relatives and friends.

Our beloved Mother Earnestine Williams was born on July 14, 1919 to John and Gracie Gray in Boscoe, Louisiana. She was one of 13 children born to this blessed union. Our heavenly Father welcomed Earnestine home on November 25, 2012. She attended... View Obituary & Service Information

The family of Ms Earnestine Gray Williams created this Life Tributes page to make it easy to share your memories.

Our beloved Mother Earnestine Williams was born on July 14, 1919...

Send flowers to the Williams family.