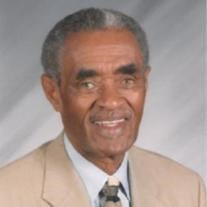 The life of Andrew Julius Mansfield was one of strength, faith, and service. Rev. Mansfield was the third of four children born to Luther and Lureatha Davison Mansfield in Perryville, LA (Morehouse Parish) on February 17, 1931. The family moved to Rayville, LA in 1932. Rev. Mansfield attended primary school at Hollywood Elementary where his mother served as principal. After graduating from Rayville Negro High School in 1948, he attended Southern University (Baton Rouge) and later enlisted in the United States Air Force. After four years of service, he immediately secured employment in Houston, TX; where he met and married Miss Mae Francis Shelly on February 18, 1953. To this union, five beautiful daughters were born. In January of 1957, Rev. Mansfield received his Bachelors Degree in Secondary Education from Grambling State University. In 1963, he earned a Masters Degree from Atlanta University. He earned his second Masters Degree in Christian Education and Philosophy from the Baptist Missionary Association Theological Seminary in Brownsville, TX in 1985 and was awarded an Honorary Doctorate Degree from the United Theological Seminary. He was called to the ministry in 1963 and preached his first sermon at First Baptist Church (Rayville, LA) where he later served as pastor. He also served as pastor of Christian Fellowship Baptist Church (Dotson, LA) and Lanes Chapel Missionary Baptist Church (Downsville, LA). He was elected pastor of the First Missionary Baptist Church of Monroe, LA in 1971. He served as the Dean of the Louisiana Congress of Christian Education for 12 years and the moderator of the 10th District Baptist Association for over 20 years. For nearly five decades, Rev. Andrew Julius Mansfield preached the uncensored, unfiltered, unembellished gospel of Jesus Christ from pulpits around the world. From the rural town of Rayville, LA to the island of St. Marteen in the Netherlands Antilles, many have been led to Christ through his profound and unwavering discipleship. He has changed the lives of millions with his message of salvation, resurrection, preparation, and education. Rev. Mansfield lived a life of service to God and mankind. Rev. Mansfield was hired as a teacher at Eula D. Britton High School (Rayville, LA) in 1960 and later hired as a counselor at Grambling State University in 1964. He retired from Grambling State University after he was elected Mayor of the Town of Grambling in 1977. During his tenure as Mayor, he had a deep appreciation for the links between the community, the university, and the city government. He was able to translate vision into strategy and strategy into action; thereby magnifying the national prominence of the City of Grambling. In light of his devotion to public service, Rev. Mansfield served on the Lincoln Parish Police Jury for over 20 years. As a result of his devotion to education, in 1998, being led by Christ, he founded the New Vision Learning Academy and served as the inaugural executive director working untiringly until his death. Due to his clear vision and dedicated service, New Vision Learning Academy continues to serve as a beacon of light for learning throughout this city, state, and nation. New Vision Learning Academy was named one of the top charter schools in the nation, thereby affording Rev. Mansfield the opportunity to visit the White House and receive an honor of distinction. Throughout the stages of his life, he was affectionately known by many names: “Pony”, “Andy”, “A.J.”, “Daddy”, “Pastor”, “Paw Paw”, “Uncle Pony”, “Uncle Mansfield”, “Pastor Rev.”, and “Rev. Mansfield”. He was a devoted husband, father, preacher, teacher, pastor, grandfather, brother, and servant of God. Because of his many talents and gifts that he shared unselfishly with others, his posterity will reign forever. He leaves to cherish fond memories: a loving and supportive wife of 59 years, Mae Francis Shelly Mansfield; five devoted daughters, Valisia Mansfield of Monroe, LA; Judge Yvette Alexander of Baton Rouge, LA; Dr. Cheyrl (Michael) Ensley of DeSoto, TX; Karen (Gregory) Potts of Bentonville, AR; Dr. Andrea (John) Miller of Monroe, LA; ten grandchildren, Anthony Evans, Nicole (Jarrow) Merenivitch, John (Georgia) Ensley, NaKesha Alexander, Andrew Ensley, Jevon Potts, Lauren Potts, Jamayne Potts, JaMariea Davis, Johniah Miller; one great grandson, Ay’Marric Harrison; one sister, Barbara Mansfield of Bastrop, LA; one brother, Luther (Ruth) Mansfield, Jr. of Slidell, LA; three nieces raised as daughters, Pamela (Harvey) Dailey of Killeen, TX; Denise (Terrance) Henderson of New York ; Sharon Shelly of Houston, TX; and many other nieces, nephews, cousins, and friends. In Lieu of Flowers donations can be made to The Reverend Andrew Mansfield Family Foundation, a 501c3 nonprofit established in his name for educational purposes. Donations can be mailed to 2804 LaSalle Street, Monroe, LA 71202.

The life of Andrew Julius Mansfield was one of strength, faith, and service. Rev. Mansfield was the third of four children born to Luther and Lureatha Davison Mansfield in Perryville, LA (Morehouse Parish) on February 17, 1931. The family... View Obituary & Service Information

The family of Reverend Andrew J. Mansfield created this Life Tributes page to make it easy to share your memories.

The life of Andrew Julius Mansfield was one of strength, faith,...

Send flowers to the Mansfield family.